Lord Indarjit at the Parliament of Religions, 2015

Role of Faith in a Secular World

Lord Indarjit at the Parliament of Religions, 2015

Lord Inderjit Singh, Baron Singh of Wimbledon, spoke at the Parliament of Religions, 2015, in Salt Lake City. It was a sheer pleasure to hear his thoughts and to interact with him. Below I reproduce a Plenary session speech which was widely attended.

From the Lord’s play all living creatures came,

And from the Divine Light all creation sprang.

Why then should we divide human creatures

Into the high and the low.

Brother, be not in error:

All Creation emanates from the one Creator

Evident in all creation,

The Lord’s Spirit is all-pervading!

The Lord, the Maker, hath molded one mass of clay

Into vessels of diverse shapes.

Free from taint are all the vessels of clay

Since free from taint is the Divine Potter.

The allusion to the different vessels of clay and the one Divine Potter reminds us that despite apparent differences, we are all equal members of our one human race.        This verse or Shabad was taken from the Sikh Holy Scriptures, the Guru Granth Sahib, in many ways encapsulates both the thrust of Sikh teachings and the central theme of this historic Parliament, in its emphasis on the absurdity of all man-made distinctions of birth, class or creed.  Other verses in the Guru Granth Sahib also stress the full gender equality.

Our Gurus emphasized respect for other ways of life in many different ways,  Guru Arjan ,the fifth of our 10 founding Gurus   incorporated some uplifting verses of Hindu and Muslim  poets into the Guru Granth Sahib Sahib, including the one I’ve just read, to show that no one religion has a monopoly on truth and all faiths should be respected.

To promote this reaching out to others, the Guru asked a Muslim saint to lay the foundation stone of the historic Darbar Sahib at Amritsar, commonly known as the Golden Temple. In furthering the world’s first major move to interfaith understanding, the Guru placed a door at each of its four sides to signify a welcome to all from any spiritual or geographic direction. The 9th Guru, Guru, Guru Teg Bahadur, took this further by giving his life defending the Hindu community’s right to freedom of worship against a policy of forced conversion by the then Mughal rulers. In doing so he gave practical utterance to Voltaire’s famous words: ‘I may not believe in what you say, but I will defend to the death your right to say it.’

I am delighted that the 2015 Parliament has set its goal as the reclaiming of our common humanity. It is a recognition that religion has largely failed to move minds to what Sikhs call a Gurmukh or Godly direction by making concern for others central to all we do. Instead of recognizing the common thrust of our different faiths, we have set barriers of belief between them smugly, and sometimes violently, proclaiming our superiority and exclusive path to God.

Our failure to give a clear ethical lead centered on compassion and concern for others has led to a society obsessed in searching for contentment through material possessions, creating a selfish society in which the vulnerable suffer. Our common task is then to reclaim the heart of society by working together to create a society that makes responsible and compassionate living central to all we do. I am confident that this Parliament will help us explore ways to do just this. 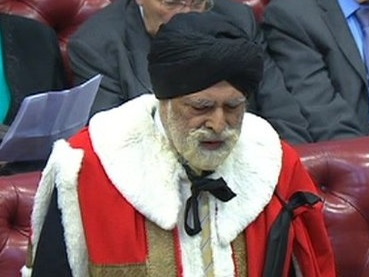 Role of Faith in a Secular World